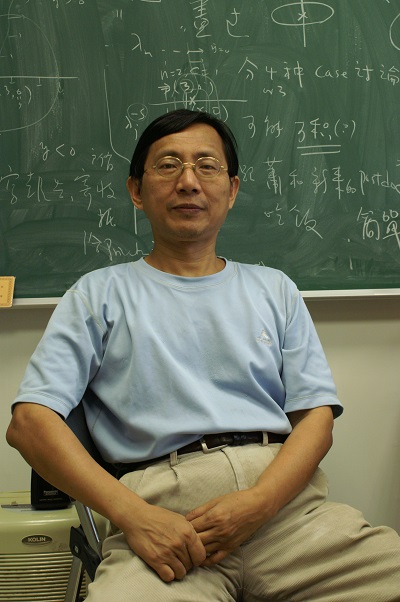 
Dr. Cheng's main research interest is on Cauchy-Riemann(CR for short) geometry and contact topology. In his Ph.D. dissertation, he classified all possible Lie algebras with the 2-gradation property-which is a special feature of CR structure. Later he proved an  equivalence between CR geometry and geometry of chains, the distinguished invariant curves in CR geometry.

In 1986 he got a NSC (National Science Council) grant for a one-year visit to the Harvard University. At Harvard,  Professor Siu introduced John Lee to him. There John Lee and he started the study of various kinds of moduli spaces of CR structrues in dimension 3. In the fall of 1992, he had a second visit supported by the NSC. This time he visited  Professor Eliashberg of the Stanford University and began to realize the deep connection between contact topology and CR geometry and their roles in the study of 3-manifolds. Many interesting problems in this respect are just emerging and are expected to attract his attention for the following years.

Later in 1997 and 2001 he received the support from the NSC again for the visits to Harvard and Princeton respectively. He then decided to work mainly on geometry and analysis related to CR structure. Together with his institute colleague Jenn-Fang Hwang, Paul Yang (Princeton University) and Andrea Malchiodi (SNS, Pisa), he developed the geometry of hypersurfaces in the Heisenberg group, proved a Bernstein-type theorem in 3D Heisenberg group, and built up a structure theorem for the singular set and characteristic curves. Later a proof of the Alexandrov-type theorem in 3D Heisenberg group was given, based on the above mentioned structure theorem. After Hung-Lin Chiu (Tsing-Hua University, Taiwan) joined the team, we could then study the umbilicity in high dimensions and characterize the Pansu spheres.

In the direction of positive mass theorem and the CR Yamabe equation, jointly with Andrea Malchiodi, Paul Yang and Hung-Lin Chiu, he obtains the results in various dimensions. For CR manifolds and complex manifolds with group action, he and his collaborators Chin-Yu Hsiao (institute colleague), I-Hsun Tsai (Taiwan University) obtain a local index formula by using the heat  kernel method. For surfaces in a CR manifold of 3D, jointly with Paul Yang and Yongbing Zhang (USTC, Hefei) he expresses two CR invariant area elements in terms of pseudohermitian geometry and studies how the associated Willmore-like energy functionals relate to the singular Yamabe problem and the volume renormalization.

In other sporadic topics, he worked with Jeffrey Case (Penn State University) and Paul Yang on a Q prime integral, a CR invariant, with Taiji Marugame (RIKEN, Japan), Vladimir Matveev (University of Jena, Germany) and Richard Montgomery (UC, Santa Cruz) on the study of CR invariant curves called chains. He and his above mentioned collaborators show that we can view chains as geodesics of a Kropina metric in Finsler geometry and obtain local connectivity by chains in general and global connectivity by chains under some positive curvature condition.